Carol Quintanilha is a photographer, DP and documentary filmmaker based in São Paulo, Brasil. Some of her clients include Greenpeace, Kodak and GNT. 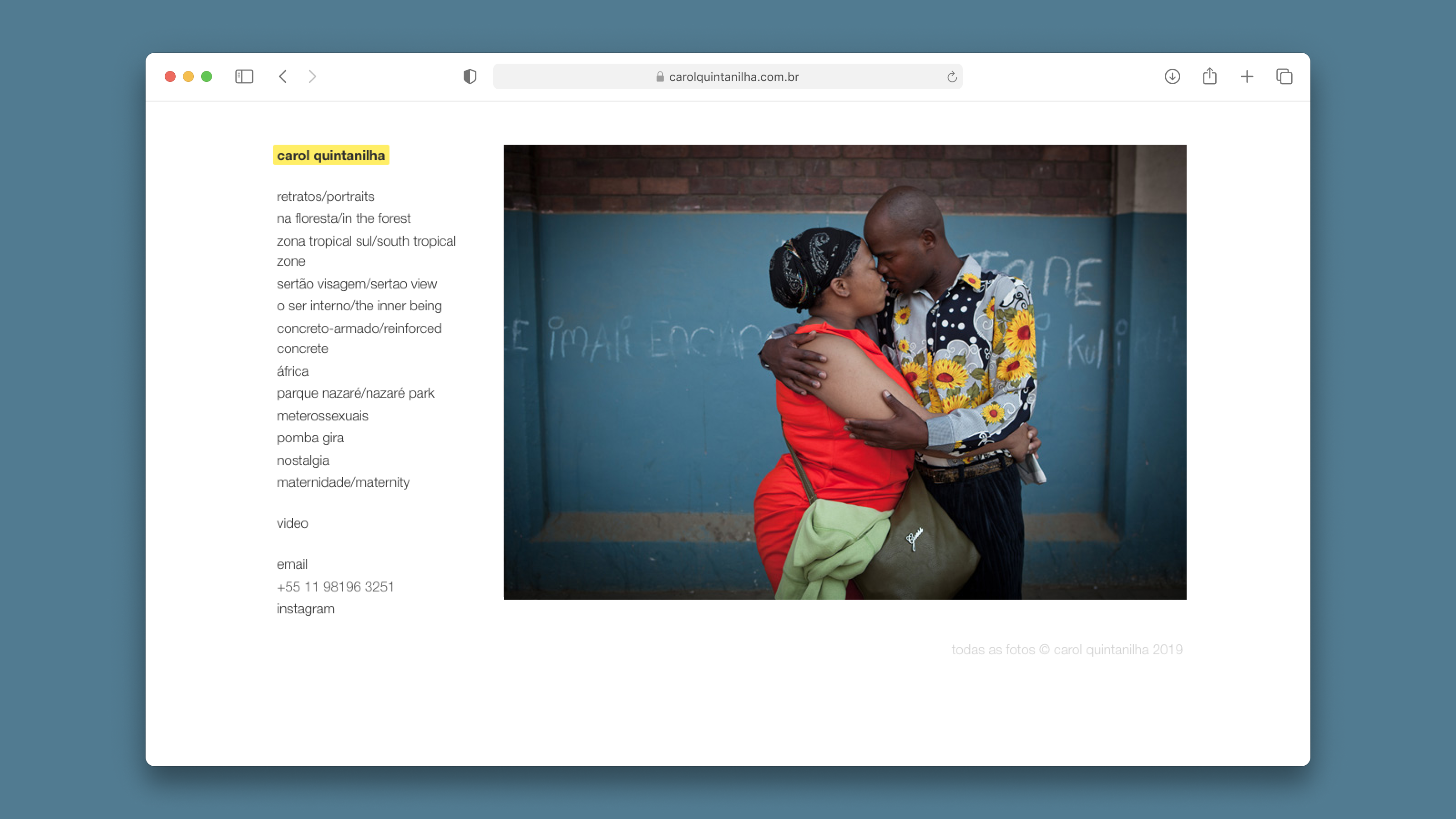 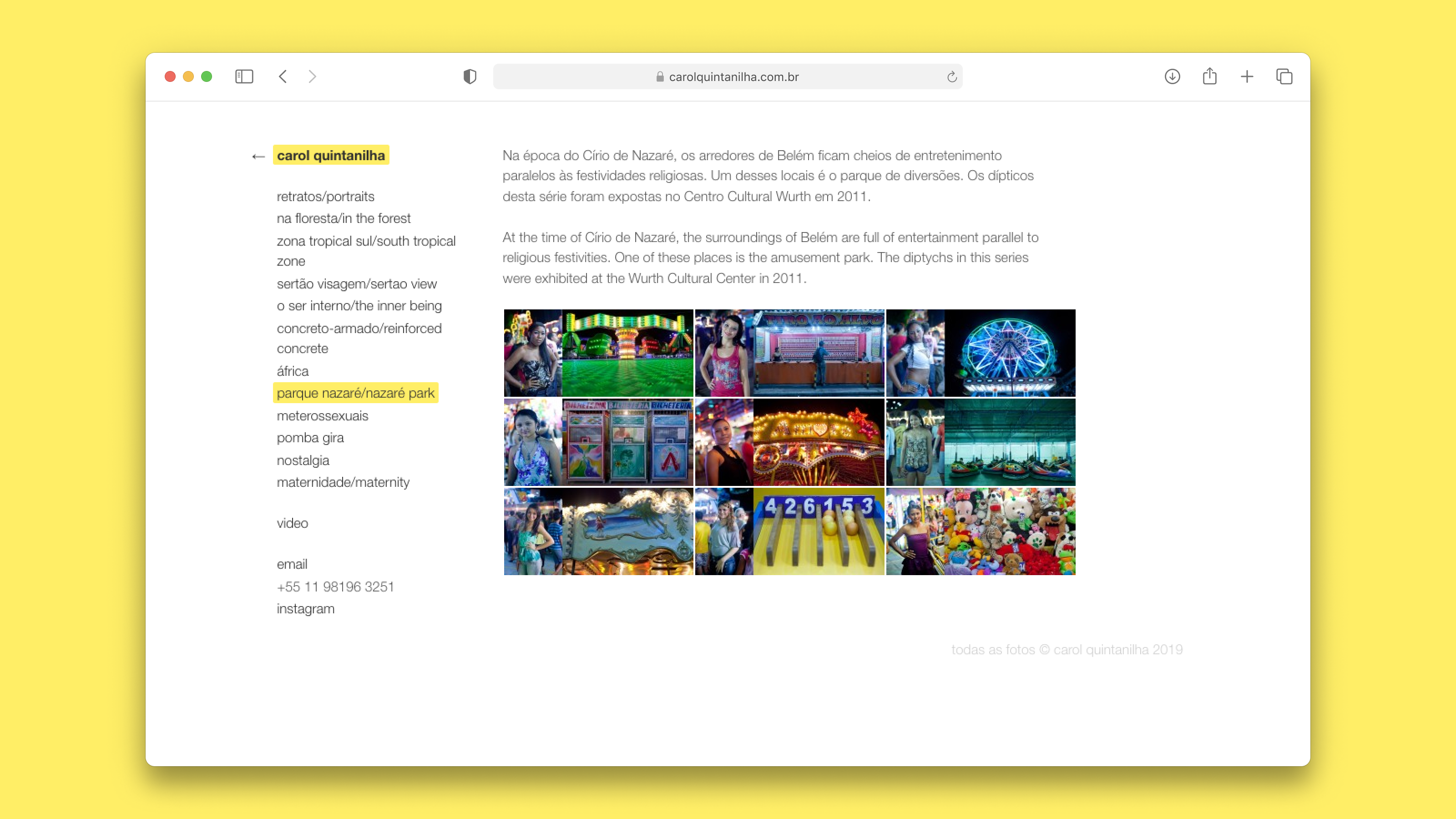 Being a visual artist, it was crucial that the interface didn’t get in the way of her work. A colour palette of white for background, dark grey for copy, with a dash of yellow for emphasis. Helvetica Neue is the only font family and 15pt is the only size.

Site also has to be fast, so the only images being loaded are the ones from the portfolio.

Another problem we were trying to solve was: it should be easy for her to keep the site up to date. An issue she had from previous (WordPress-based) versions of the site was that every time she had to add a new piece or remove an old one, she had to follow a number of complicated steps.

So, for the backend we decided to go with Kirby, the excellent file-based CMS. Although it does offer an admin interface, Kirby also allows her to add or remove content easily through FTP, a technology she was already familiar with. Adding a new page to the site can be as simple as dragging and dropping a folder with a bunch of .jpegs and a .txt.

Biggest constraint here was adapting the lovely artwork by Gustavo Gialuca into a digital project. On a very short deadline. With a tiny budget. But we were able to pull it off! 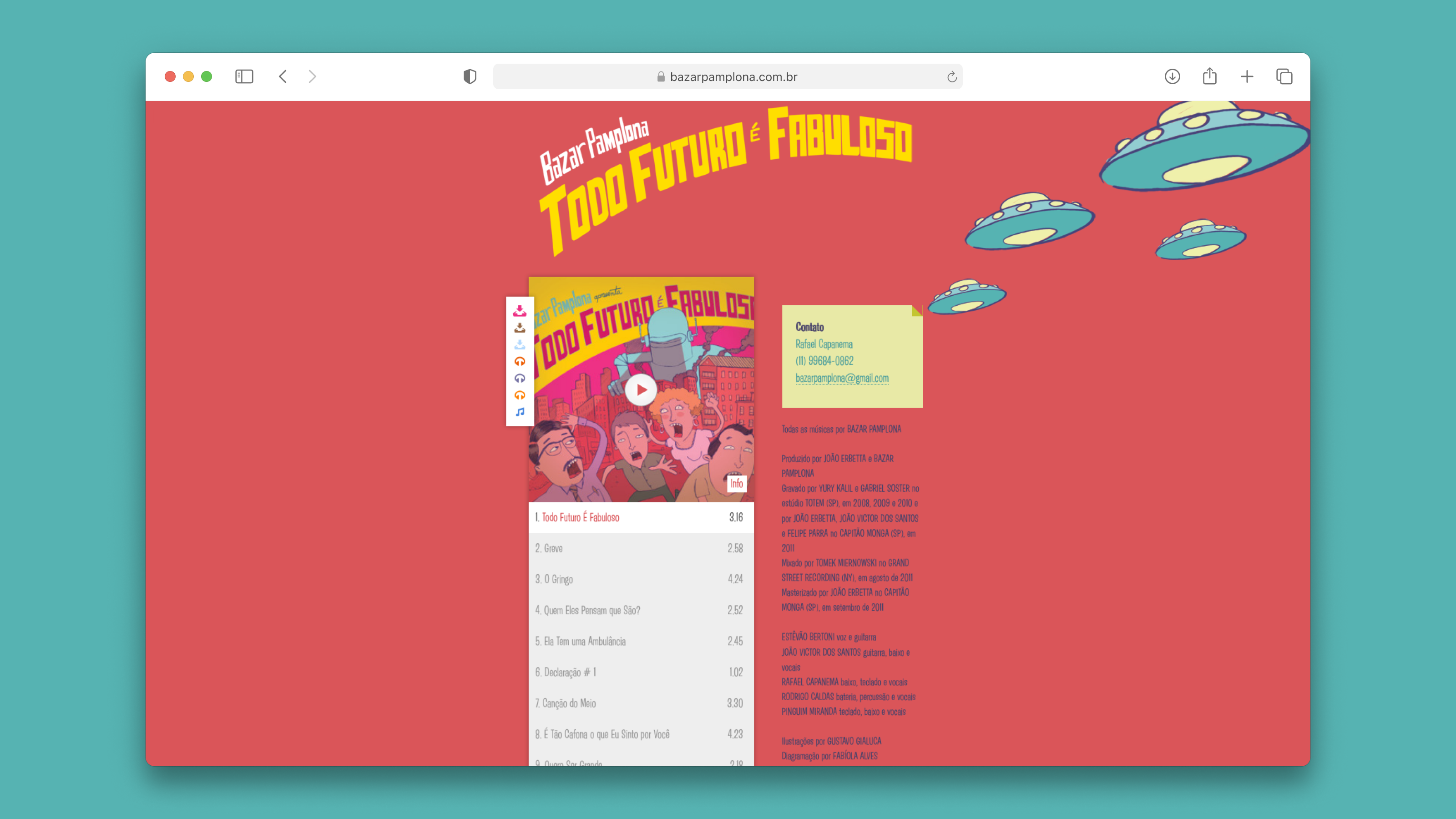 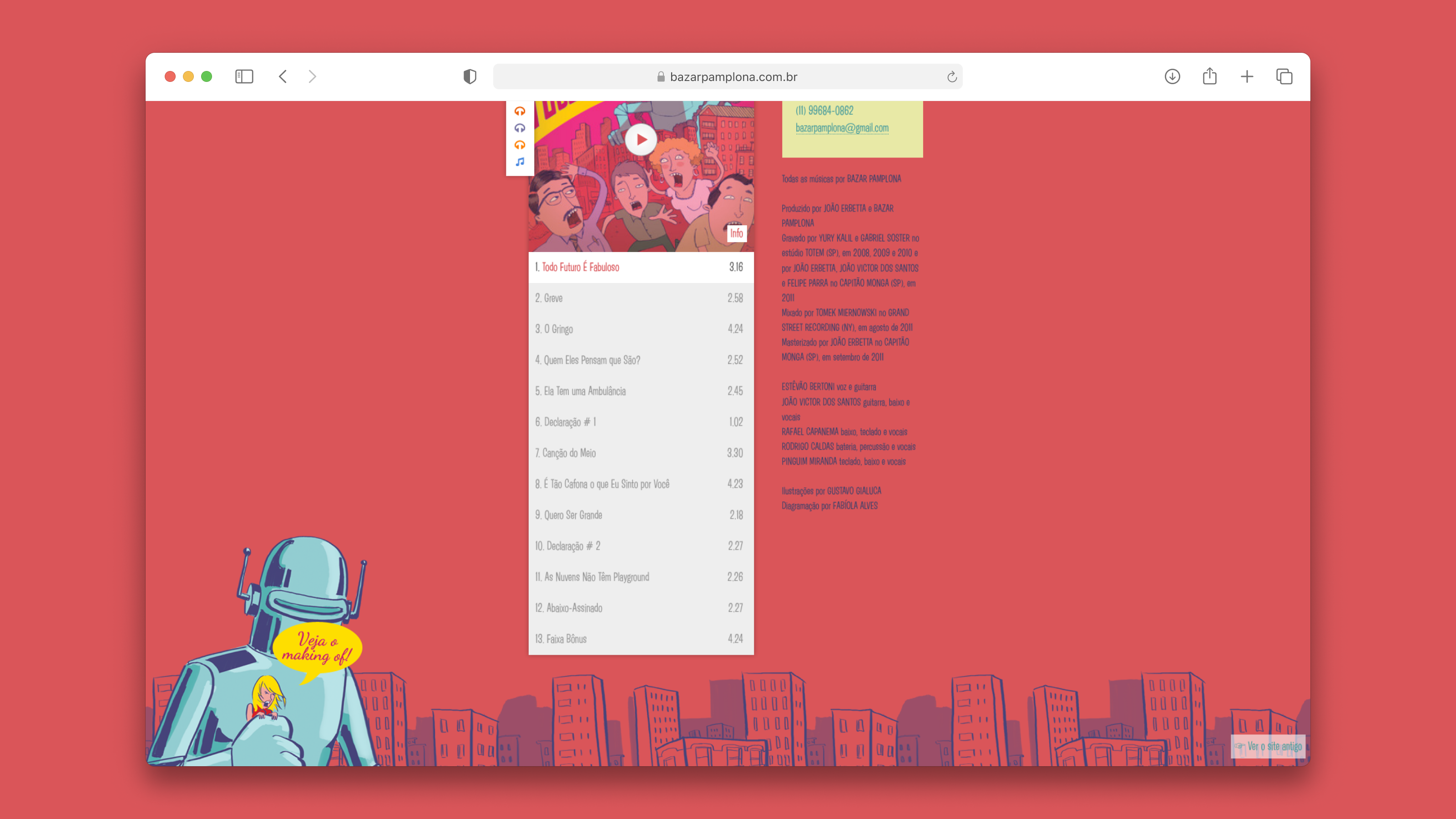 Kung Fu is an independent audio producing company from South of Brazil. They have produced content for Nestlé, Coca-Cola and Volkswagen. 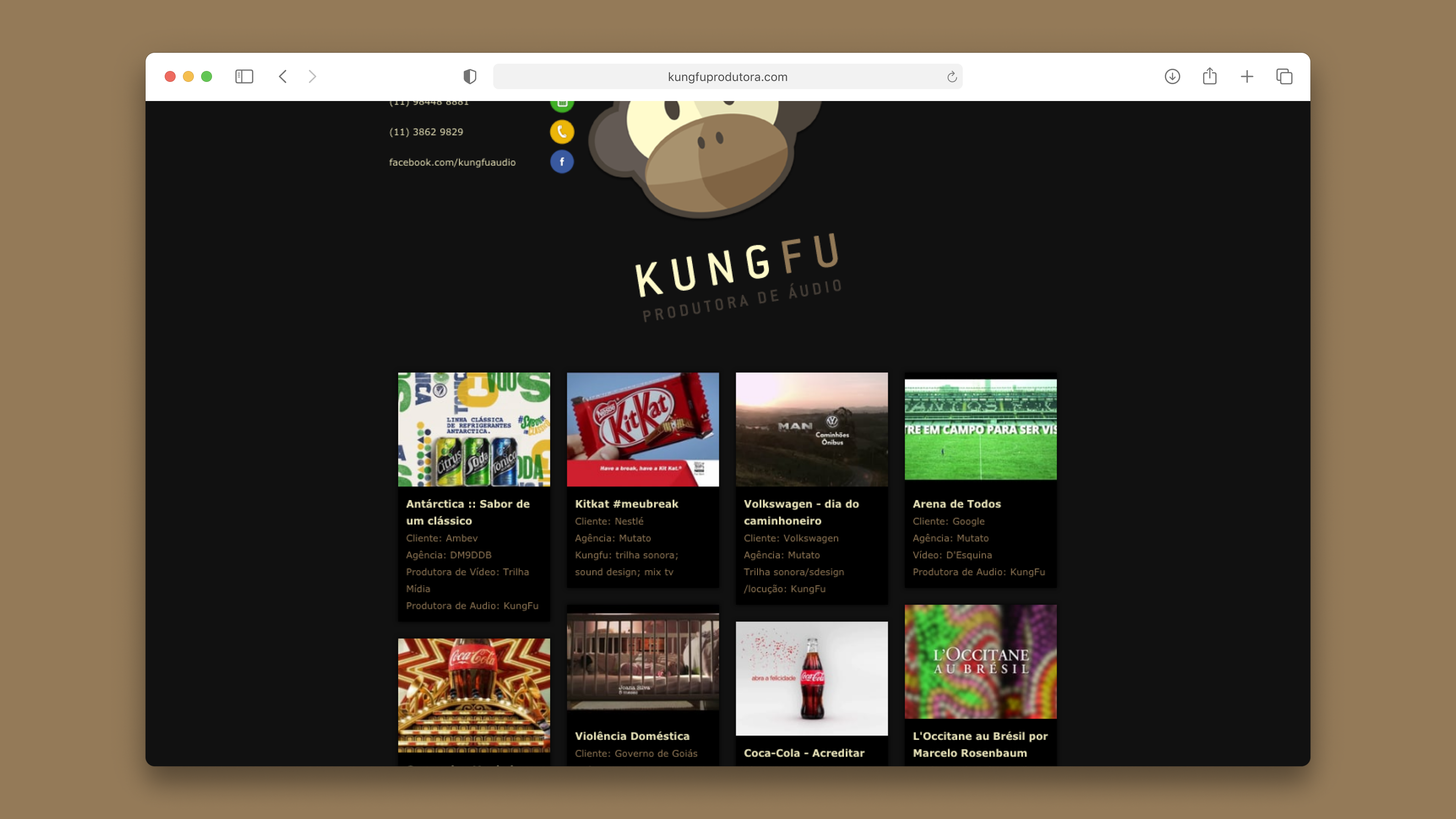 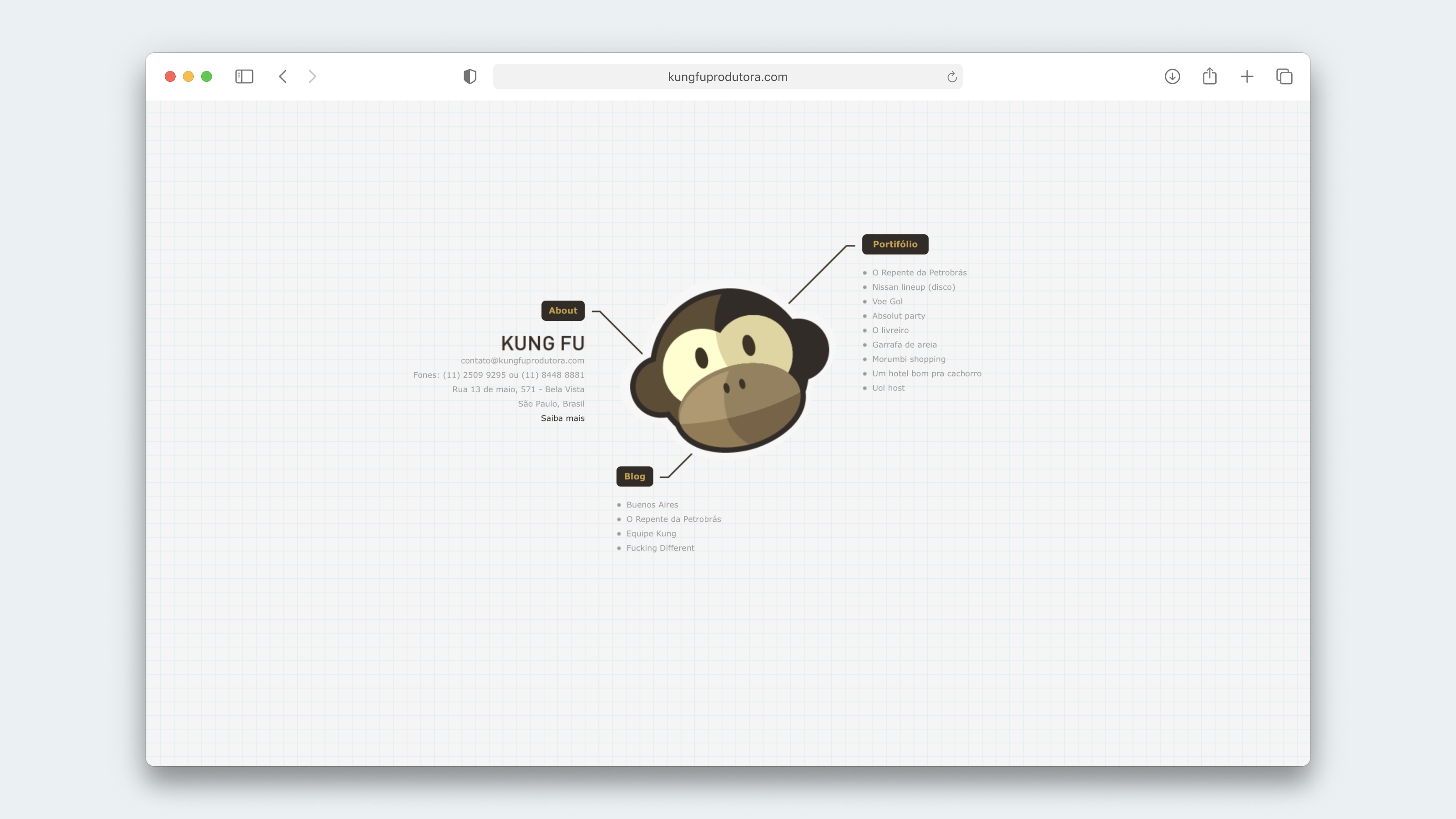 They reached out to us with a simple enough task: to integrate some sort of portfolio to their existing website. They were getting more clients and needed a way to showcase it. Problem was: the site was a static one-pager. So they would also need us to build an easy way to add and remove content themselves.

First option was WordPress. Classic CMS, free to use, the one we had the most experience working with. But that would raise other issues: hosting costs going up and a considerable amount of extra maintenance work. We could do better!

So, after some research and testing, we did: Vimeo’s API. They were already uploading the videos to Vimeo anyway. With only a few extra lines of code we were able to pull thumbnails, direct links and relevant details directly from there. Basically a site that updates itself! At a fraction of the cost. With no extra work required on their part, so they can focus on what actually matters.

In collaboration with Agência Preza.